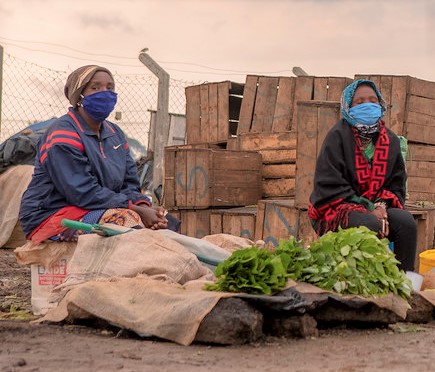 Survey ID Number
KEN_2020_COVIDRS_v07_M
Title
COVID-19 Rapid Response Phone Survey with Households 2020-2022, Panel
Subtitle
Waves 1-8
Country/Economy
Study type
1-2-3 Survey, phase 1 [hh/123-1]
Series Information
This dataset contains information from the eight waves of the COVID-19 RRPS with households in Kenya. The first five waves were conducted over a period of two months each, while wave 6 and 7 were conducted over a period of four months. Wave 8 was conducted over four weeks. Data collection was implemented between May 2020 and July 2022.

The data set contains information from two samples of Kenyan households. The first sample is a randomly drawn subset of all households that were part of the 2015/16 Kenya Integrated Household Budget Survey (KIHBS) Computer-Assisted Personal Interviewing (CAPI) pilot and provided a phone number. The second was obtained through the Random Digit Dialing method, by which active phone numbers created from the 2020 Numbering Frame produced by the Kenya Communications Authority are randomly selected. The samples cover urban and rural areas and are designed to be representative of the population of Kenya using cell phones. Waves 1-7 of this survey include information on household background, service access, employment, food security, income loss, transfers, health, and COVID-19 knowledge and vaccinations. Wave 8 focused on how households were exposed to shocks, in particular adverse weather shocks and the increase in the price of food and fuel, but also included parts of the previous modules on household background, service access, employment, food security, income loss, and subjective wellbeing.

The same questionnaire is also administered to refugees in Kenya, with the data available in the UNHCR microdata library: https://microdata.unhcr.org/index.php/catalog/296/
Unit of Analysis
Household, Individual

Notes
The Kenya COVID-19 RRPS survey covers the following topics: Household Roster, Travel Patterns & Interactions, Employment, Food security, Income Loss, Transfers, Subjective welfare (50% of sample), Health, COVID-19 Knowledge and Vaccinations, Household and Social Relations (50% of sample). In wave 8, the questionnaire was shortened: modules on Health, COVID-19 Knowledge and Vaccinations were dropped and only essential questions were kept in the remaining modules. New questions were added on the exposure to idiosyncratic and aggregate shocks, on food and fuel price increases and subjective wellbeing.

Sampling Procedure
The COVID-19 RRPS with Kenyan households has two samples. The first sample consists of households that were part of the 2015/16 KIHBS CAPI pilot and provided a phone number. The 2015/16 KIHBS CAPI pilot is representative at the national level stratified by county and place of residence (urban and rural areas). At least one valid phone number was obtained for 9,007 households and all of them were included in the COVID-19 RRPS sample. The target respondent was the primary male or female household member from the 2015/16 KIHBS CAPI pilot. The second sample consists of households selected using the Random Digit Dialing method. A list of random mobile phone numbers was created using a random number generator from the 2020 Numbering Frame produced by the Kenya Communications Authority. The initial sampling frame therefore consisted of 92,999,970 randomly ordered phone numbers assigned to three networks: Safaricom, Airtel and Telkom. An introductory text message was sent to 5,000 randomly selected numbers to determine if numbers were in operation. Out of these, 4,075 were found to be active and formed the final sampling frame. There was no stratification and individuals that were called were asked about the households they live in. Until wave 7 sampled households that were not reached in earlier waves were also contacted along with households that were interviewed before. In wave 8 only households that had previously participated in the survey were contacted for interview. The “wave” variable represents in which wave the households were interviewed in.
Weighting
Cross-Sectional weights

For the KNBS and RDD samples, to make the sample nationally representative of the current population of households with mobile phone access, we create weights in two steps.

Abstracting from differential attrition, the weights from the 2015/16 KIHBS CAPI pilot make the KIHBS sample representative of type (I) households. For RDD households, we ask whether they existed in 2015/16, when they had acquired their phone number, and where they lived in 2015/16, allowing us to classify them into type (I), (II) and (III) households and assign them to KIHBS strata. We adjust weights of each RDD household to be inversely proportional to the number of mobile phone numbers used by the household, and scale them relative to the average number of mobile phone numbers used in the KIHBS within each stratum. RDD therefore gives us a representative sample of type (II) and (III) households. We then combine RDD and KIHBS type (I) households by ex-post adding RDD households into the 2015/16 sampling frame and adjusting weights accordingly. Last, we combine our representative samples of type (I), type (II) and type (III), using the share of each type within each stratum from RDD (inversely weighted by number of mobile phone numbers). Variable: weight_raw

Step 2: Scale the weights to population proportions in each county and urban/rural stratum: We use post stratification to adjust for differential attrition and response rates across counties and rural/urban strata. We scale the raw weights from step 1 to reflect the population size in each county and rural/urban stratum as recorded in the 2019 Kenya Population and Housing Census conducted by the KNBS (2019 Kenya Population and Housing Census, Volume II: Distribution of Population by Administrative Units, December 2019, Kenya National Bureau of Statistics, https://www.knbs.or.ke/?wpdmpro=2019-kenya-population-and-housing-census-volume-ii-distribution-of-population-by-administrative-units). Variable: weight

To construct panel weights, we follow the approach outlined in Himelein (2014): “Weight Calculations for Panel Surveys with Subsampling and Split-off Tracking”. In each household we follow one target respondent. Wherever households split, only the current household of the target respondent was interviewed. The weights for the wave 1 and 2 balanced panel are constructed by applying the following steps to the full sample of Kenyan nationals:

0. Wave 1 cross-sectional weights after post-stratification adjustment are used as a base. W_1 = W_wave1
1. Attrition adjustment through propensity score-based method: The predicted probability that a sample household was successfully re-interviewed in the second survey wave is estimated through a propensity score estimation. The propensity score (PS) is modeled with a linear logistic model at the level of the household. The dependent variable is a dummy indicating whether a household that has completed the survey in wave 1 has also done so in wave. The following covariates were used in the linear logistic model: Urban/rural dummy, County dummies, Household head gender, Household head age, Household size, Dependency ratio, Dummy: Is anyone in the household working, Asset ownership: Radio, Asset ownership: Mattress, Asset ownership: Charcoal Jiko, Asset ownership: Fridge, Wall material: 3 dummies, Floor materials: 3 dummies, Connection to electricity grid, Number of mobile phones numbers household uses, Number of phone numbers recorded for follow-up, Sample dummy for estimation with national samples
2. Rank households by PS and split into 10 equal groups
3. Calculate attrition adjustment factor: ac (attrition correction) = the reciprocal of the mean empirical response rate for the propensity score decile
4. Adjust base weights for attrition: W_2 = W_1 * ac
5. Trim top 1 percent of the weights distribution (), by replacing the weights among the top 1 percent of the distribution with the highest value of a weight below the cutoff. W_3 = trim(W_2)
6. Apply post-stratification in the same way as for cross-sectional weights (step 2) Variable: weight_panel_w1_2

Dates of Data Collection
Data Collection Mode
Computer Assisted Personal Interview [capi]
Data Collection Notes
PRE-LOADED INFORMATION: Basic household information was pre-loaded in the CATI assignments for each enumerator. The information, for example the household's location, household head name, phone numbers etc, was used to help enumerators call and identify the target households. The list of individuals from the KIHBS CAPI pilot and their basic characteristics were uploaded as well as basic information from previous survey waves where available from wave 2 onward.

Questionnaires
The questionnaire was administered in English and is provided as a resource in pdf format.
Additionally, questionnaires for each wave are also provided in Excel format coded for SCTO.
The same questionnaire is also administered to refugees in Kenya, with the data available in the UNHCR microdata library: https://microdata.unhcr.org/index.php/catalog/296/

.a for ‘Don’t know’
.b for ‘Refused to respond’
.c for ‘Outliers set to missing’
.d for ‘Inconsistency set to missing’ (used for employment data as explained below)
.e for ‘Field Skipped’ (where an error in the survey tool caused the question to be missed)
.z for ‘Not administered’ (as the variable was not relevant to the observation)

More detailed data on children was collected from between 3 and 7, compared to waves 1, 2 and 8. In waves 1 and 2, data on children, e.g. on their learning activities, was collected for all children in a household with one question. Therefore, variables related to children are part of the ‘hh’ data for waves 1 and 2. Between waves 3 and 7, questions on children in the household were asked for specific children. Some questions covered all children, while others were only administered to one randomly selected child in the household. This approach allows to disaggregate data at the level of the child household members, and the data can be found in the ‘child’ data set. The household level weights can be used for analysis of the children’s data. In wave 8, detailed information on children was dropped, as the questionnaire focused on other topics.

Improved quality insurance algorithms lead to minor revisions to wave 1 to 5 data. Based on additional data checks, the team has made minor refinements to wave 1 to 5 data. The identification of the household members that were the respondent or the household head was refined in the rare cases where it was not possible to interview the same respondent as in previous waves for a given household such that another adult was interviewed. For this reason, for about 2 percent of observations the household head status was assigned to an incorrect household member, which was corrected. For <1 percent of households the respondent did not appear in adult level dataset. For about 1 percent of observations in wave 5 the respondent appeared twice in the adult level dataset.

Confidentiality
Before being granted access to the dataset, all users have to formally agree: 1. To make no copies of any files or portions of files to which s/he is granted access except those authorized by the data depositor. 2. Not to use any technique in an attempt to learn the identity of any person, establishment, or sampling unit not identified on public use data files. 3. To hold in strictest confidence the identification of any establishment or individual that may be inadvertently revealed in any documents or discussion, or analysis. Such inadvertent identification revealed in her/his analysis will be immediately brought to the attention of the data depositor.
Citation requirements
Use of the dataset must be acknowledged using a citation which would include:
- the Identification of the Primary Investigator
- the title of the survey (including country, acronym and year of implementation)
- the survey reference number
- the source and date of download

Disclaimer
The user of the data acknowledges that the original collector of the data, the authorized distributor of the data, and the relevant funding agency bear no responsibility for use of the data or for interpretations or inferences based upon such uses.